Victor Roubidoux, an Ioway member, was born in Perkins, Ok. He lived his life in Perkins until he joined the US Army in 1969. He served for 4 years. During his time in the army, he fought in 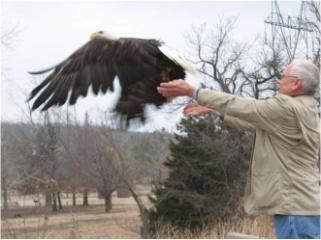 Vietnam for a total duration of 30 months. During this time he earned a Bronze Star with V Device as well as the Vietnamese Cross of Gallantry with Gold Palm.

When Victor returned, he began working for the Iowa Tribe of Oklahoma. He served the tribe by representing them as their Treasurer for 13 years, was the Chairman for the Repatriation and Sacred Sites Committee for the National Congress of American Indians and the Treasurer for Keeper of the Treasures. It was during this time that he developed the idea for an eagle sanctuary after viewing a news clip about an eagle injured in Oklahoma.  This bird was transferred to New Mexico because there was no place for it in Oklahoma. Victor began gathering information and support from the Iowa Nation to begin the project.  Once everything was completed the tribe asked Victor to run the facility. Victor accepted and started training. Since then Victor has ran the facility for more than 7 years, completed 23 eagle releases, saved the lives of over 50 resident eagles, and educated more than 13,000 people about eagles.